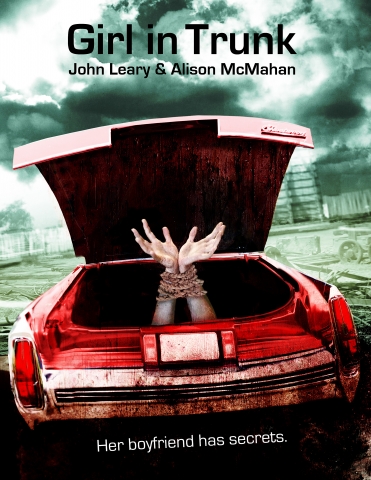 Brianna has to outsmart her torturers, get back at her con-man fiancé, and escape from the trunk of a car all at the same time.

Brianna McKinley hates working at the clinic but loves dating the suave Jack Toland. Jack arrives for tonight’s date completely broke. Brianna makes the dumbest mistake of her life when she agrees to be smuggled into a concert in the trunk of the car.

In just a few minutes the car is hit and Brianna is knocked out. She wakes up hours later, injured, dehydrated, alone. She cries out for help. No answer.

Then there are voices. Corporate security agents Henny and Lon search the car. Brianna thinks she is saved.

But they don’t take her from the trunk.  Henny starts an interrogation.  Where is your boyfriend? And what has he done with our computer chip?

Her torturers strip-search her, give her truth serums and laxatives, deny her food and water. Through it all Brianna manages to keep the chip safe and fights back, buying herself time to figure out what Jack was up to and with whom.  Enraged, her enemies fill the trunk of the car with smoke, and when Brianna still resists, with scorpions.

Her enemies make one serious mistake: they let her keep her handbag. Brianna turns a perfume sprayer and a lighter into an eye-scorching flame thrower.

To escape Brianna has to figure out what Jack was up to and with whom, study her captors’ weak points and then pit her interrogators against each other. A tall order for a girl who turned twenty-one while locked in the trunk of a car left abandoned in a junkyard in the desert.

Turns out Jack isn’t dead, but kidnapped, but he manages to escape and get Brianna out.

But once Jack has the chip he pushes her back into the trunk and the car into the crusher.

Now Brianna must fight her way out of the trunk before her Cadillac prison becomes her tomb.

Alison McMahan chases footage for her documentaries through jungles in Honduras and Cambodia, favelas in Brazil and race tracks in the U.S.  Her most recent documentary, Bare Hands and Wooden Limbs, narrated by Sam Waterston, aired on BBC Scotland and is distributed by Shami Media. www.HomunculusProds.com. Her book, Alice Guy Blaché, Lost Visionary of the Cinema (Bloomsbury, 2002), about the first woman filmmaker, won two awards, was translated into Spanish, and adapted into a play in 2012. The film rights were purchased by the PIC agency for development into a documentary film, Be Natural, with Robert Redford as executive producer, and narration by Jodie Foster. McMahan lives in Fort Lauderdale, FL.