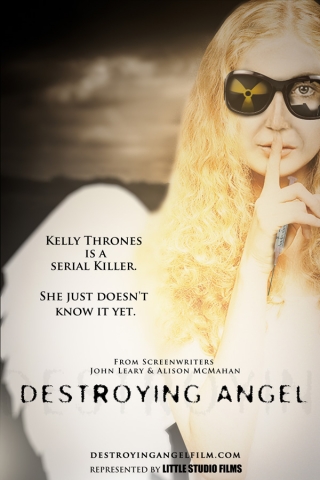 A successful saleswoman is arrested for hunting down and killing known murderers in her sleep, but soon the law realizes she can help them find the killers before they strike again.

Kelly Thrones is a serial murderer; she just doesn’t know it yet.

She has killed six people by the time the FBI arrests her.  They have her prints, DNA, and video proof of her leaving the latest murder scene.  But Kelly has no motive and no memory of the killings.

While in lock-up, Kelly kills an inmate. Now Kelly knows she is possessed.

FBI Agent Powers discovers that each of Kelly’s victim was a serial killer.

He no longer wants to prosecute her, he wants to hire her.

But Kelly wants to be free of this entity. She communicates with the rogue angel and using all of her sales skills she strikes the deal of her life and convinces the angel to leave.

Agent Powers also offers Kelly deal: her freedom if she will help bring down Dillon Crompton, an arsonist who has been setting bigger and bigger fires.Kelly agrees and heads into the Blue Jay Nuclear Power plant to stop a killer.

But without her rogue Angel, will she come out of it alive?

Alison McMahan chases footage for her documentaries through jungles in Honduras and Cambodia, favelas in Brazil and race tracks in the U.S.  Her most recent documentary, Bare Hands and Wooden Limbs, narrated by Sam Waterston, aired on BBC Scotland and is distributed on Kanopy. www.HomunculusProds.com. Her book, Alice Guy Blaché, Lost Visionary of the Cinema(Bloomsbury, 2002), about the first woman filmmaker, won two awards, was translated into Spanish, and adapted into a play in 2012. The film rights were purchased by the PIC agency for development into a documentary film, Be Natural, with Robert Redford as executive producer, and narration by Jodie Foster. McMahan lives in Fort Lauderdale, FL.