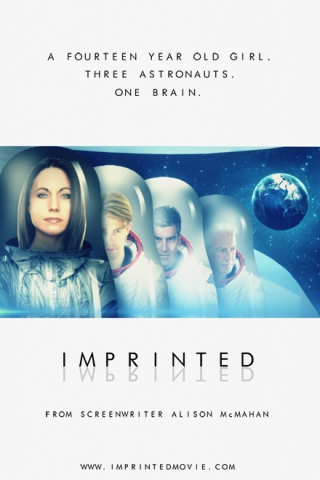 Miami 2080: Ten years after the floods. Teenaged Vivien embarks on an eight year space mission to save Earth; alone except for the minds of three brilliant astronauts... and a psychopath... imprinted in her brain.

South Florida, the near future. Climate change has left many coastal cities, including Miami, flooded and nearly uninhabitable. There are tent cities clustered on the tops of buildings, yachts gathered covered-wagon style with armed gunman patrolling the decks and pointing their weapons at passing helicopters.

The Last Seed Co. makes a desperate attempt to save humanity by collecting "seed water" from Europa, one of Jupiter's moons. Europa's waters have hardy microbes that could flourish in Earth's waters and enable life on Earth to continue.

But political instability means there are only enough funds for one small ship, just big enough for one person to stay alive for the eight-year mission. The astronaut who goes on the mission has to start out as a child; the only child with the right genetic profile is 14-year-old Vivien.

Vivian will have some company in the journey  into space – sort of. Scientist Jeanne Dorfman has developed a technique to imprint the knowledge of three adult astronauts—Paulsen the pilot, Vivien’s father the biologist, and Craig the engineer—onto the mind of a child. Dorfman secretly imprint herself onto Vivien's mind as well.

Once out in space Vivien does her best to adapt to living with the imprints. She feels haunted, and wakes up covered with cuts and bruises. Dorfman's imprint, stowed away in the recesses of Vivien's mind, has a glitch and is now psychotic.

With the help of the imprints of her father and Craig the engineer, Vivien wrestles control away from the psycho-Dorfman imprint just long enough to complete the mission.

Vivien makes it home, the mission partially accomplished,  only to find that real Dorfman sells the Imprinting technology as a guarantee of immortality. Dorfman is also imprinting herself on every client, so that one day she will control the world. Vivien, her father, and Craig are determined to stop her at any cost.

ALISON MCMAHAN owns the rights to the short story, “Rub-a-Dub” by Daniel Galouye that inspired this screenplay (Galouye’s novel Simulacron 3 became the film The 13th Floor). McMahan is an award-winning screenwriter and author and an independent filmmaker. Her most recent documentary, Bare Hands and Wooden Limbs, narrated by Sam Waterston,  is distributed by Shami Media.