Outlander not airing in UK? 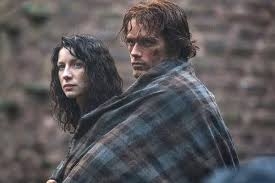 I was very surprised to find out that the Outlander romance/time travel series based on the Outlander novels by Diana Gabaldon, set and shot entirely in Scotland, is not airing in the UK.

The series is now into its third week in the U.S. It's lush, historically rich,  and sexy. Women all over the U.S. are glued to it on Starz on Saturday nights while their husbands go unfed and their children play in traffic.

But in the UK, and Scotland itself? Nothing, nada. Not sure if that has anything to do with Scotland's upcoming referendum for independence. You mean, politics trump romance? Shocking.

It's not that Brits don't want to see it. They do. They're clamoring for it. The problem seems to be political.

This article by the Guardian gives an overview of the issues, and, of greater interest for my fellow filmmakers who read this blog, an overview of the UK viewing channels. If you are producing something you want to sell to the UK (my own documentary, Bare Hands and Wooden Limbs, aired on BBC Scotland), you need to read this.

Which UK channel should pick up time-travel drama Outlander?

Starz's Scotland-based big-budget historical romance was well-received when it debuted this weekend in the US, but where should its British home be?

Read the rest of the article here.