Reviews of Be Natural, documentary about Alice Guy

I posted this on my website about all things Alice Guy and early cinema. Here is a selection and link: 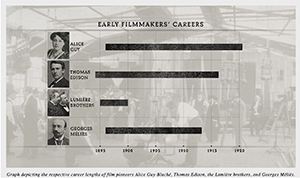 In case you are new to this page, Be Natural is the feature-length documentary based, in part, on my book, Alice. Here is a link to the Be Natural Page that lists where the film can be seen in theaters this month and into June, both in the U.S. and internationally.

Here are links to some reviews:

See this movie. Make it known with your box-office dollars — if possible — that you care about this stuff. Because if you love movies and you don’t care, you’re just not paying attention.

“There has been a longstanding myth that filmmaking is a man’s game,” she continued, “and that narrative has had a lot of sway and has obscured the careers of many women, probably most egregiously Guy Blaché.” (Shelley Stamp, quoted in the review)

She was, in sum, a studio chief as well as a director and producer — a key figure in the emergence of two major national cinemas. The recovery of this reputation is central to Green’s project, and she builds on the work of historians and archivists, including Guy Blaché’s biographer, Alison McMahan.